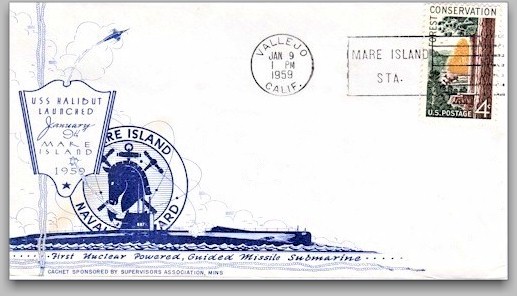 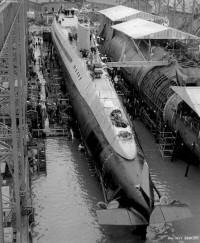 USS HALIBUT had the distinction to be the first submarine in the world designed and built from the keel up to launch guided missiles, and could carry five Regulus II missiles in a hangar integral with the hull.  She is also the first submarine to carry the Ships Inertial Navigation System (SINS). 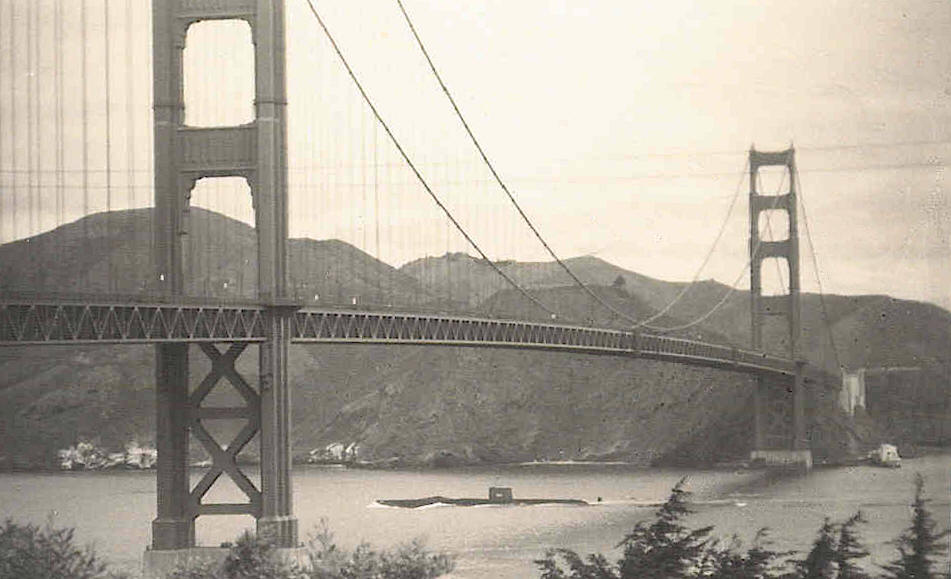 While designed to carry the Regulus II missile, the program had been terminated just 17 days prior to HALIBUT'S commissioning.  So HALIBUT departed for her shakedown cruise 11 March 1960, equipped with Regulus I missiles. En route to the South Pacific, on 25 March, she became the first nuclear powered submarine to successfully launch a guided missile.

This was also to be a goodwill cruise to New Zealand and Australia. When HALIBUT crossed the equator on 9 April, she stopped for a topside Shellback initiation and swim-call.

HALIBUT'S first stop in New Zealand was the Devonport Dockyard in Auckland, from 19 to 21 April 1960. See video: http://www.nzhistory.net.nz/media/video/uss-halibut-nuclear-submarine. 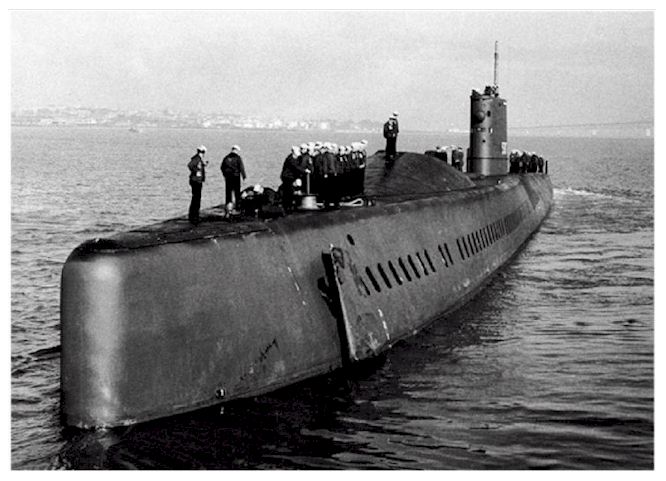 
After visiting the capital city, Wellington from 24 to 27 April, HALIBUT then joined other units of the 7th Fleet, for port visits to Sidney and Melbourne. This lasted from the 1st to the 7th of May. The occasion was to celebrate the 18th anniversary of the Battle of the Coral Sea.

HALIBUT returned to the Mare Island Shipyard on 18 June, 1960, for a routine yard availability. After a short training cruise, she departed 7 November for Pearl Harbor and active service with Pacific Fleet.  On her first deployment she successfully launched her seventh consecutive Regulus I missile during a major Southeast Asia Treaty Organization weapons demonstration.

After a short stay back in Pearl Harbor, HALIBUT began preparations for her second deployment on
1 May, 1961.  During the months that followed she participated in several guided missile launching exercises and underwent intensive training.  HALIBUT deployed for the third time to the Western Pacific in late 1961, establishing a pattern of training and readiness operations followed through 1964.  On 4 May 1964, HALIBUT departed Pearl Harbor for the last Regulus missile patrol to be made by a submarine in the Pacific - Polaris was now on line.

In September 1959, with the 1st patrol of GRAYBACK, an era of submarine history  began that would go unrecognized for almost 40 years. Five REGULUS submarines:   USS GRAYBACK (SSG 574), USS TUNNY (SSG 282), USS BARBERO (SSG 317), USS GROWLER (SSG 577) and USS HALIBUT (SSGN 587) deployed on 41 deterrent patrols under the earth's oceans over the course of 5 years.

Personnel who served aboard HALIBUT during these patrols are now authorized to wear the SSBN Deterrent Patrol Insignia.

In February 1965, HALIBUT entered Pearl Harbor Naval Shipyard for a major overhaul, and on 15 August she was re-designated SS(N)587. 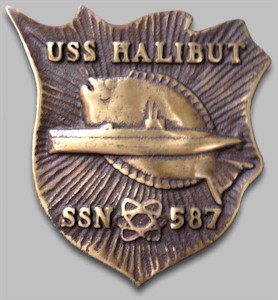 After further modifications  HALIBUT began service in May 1966 with the Deep Submergence Group, involved in deep sea search & recovery.  Other "special operations" occupied HALIBUT until July 1968 when she was given the covert mission of locating K-129, a Soviet Golf II missile submarine, which sank the previous February.  Finding the sunken boat in waters three miles deep seemed impossible, but the mission ("Operation Sand Dollar") was accomplished and Lyndon Johnson awarded HALIBUT the Presidential Unit Citation (PUC), the highest submarine award possible.

HALIBUT'S success in locating and photographing K-129 resulted in President Nixon giving the go-ahead to the CIA's "Project Azorian." Howard Hugh's Global Marine, Inc. was contracted to design, build and operate the "Glomar Explorer" in order to secretly salvage the sunken Soviet submarine from the ocean floor.

In late 1970 HALIBUT underwent further modifications to accommodate a special group of saturation divers using methods pioneered at SeaLab.  This "Special Projects" boat was now a part of Submarine Development Group One.

In October of 1971 she embarked on another Spec Op, this time to launch one of the most critical spy operations undertaken by submarines during the cold war.  Halibut was to locate and tap an underwater communications cable that ran from the Soviet missile submarine base at Petropavlovsk, on the Kamchatka peninsula, under the Sea of Okhost, to Fleet headquarters near Vladivostok (see below for detailed look at diving apparatus).

Wilbur (Jerry) O'Neill, while working for Westinghouse in Annapolis MD, designed a semi-closed tethered diver breathing apparatus which became the USN Mark XI. Having learned that this apparatus was used from the Halibut during the episodes at the Sea of Okhost, he contacted me for verification. Diver Bob Jones volunteered the following:

"The diving rigs we used on the first two missions ('71 & '72) were umbilical supplied and we got them from Westinghouse. They were called the "Abalone" or Mk 11. The rumored price was 3 million for 6 rigs!"

Jerry O'Neill was pleased to learn that his efforts contributed to the success of this mission, and he forwarded other images (below) that should be of interest to divers and those who were involved in this operation. Most of these images are from the SCUBA MK 11 MOD 0 - Operations and Maintenance manual, Deep Submergence Systems Office, April 1971.

On 1 November 1975 HALIBUT commenced a pre-inactivation availability at Mare Island which culminated in her decommissioning on 30 June 1976, and subsequent transfer to the Reserve Fleet. During her 16½ years of commissioned service Halibut completed 1,232 dives and 32 Regulus missile test launches.

She was stricken from the Navy Register on 30 April 1986.  The former HALIBUT entered the Navy’s nuclear powered ship and submarine recycling program on 12 July 1993, and on 9 September 1994 she ceased to exist as a complete ship. 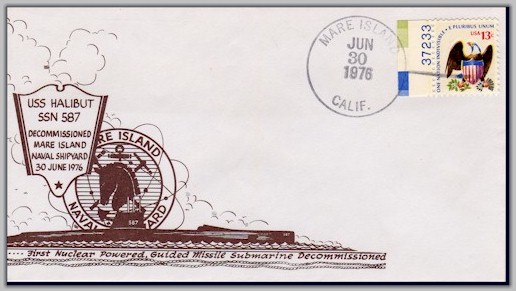 On the surface - full steam ahead - during sea trials. 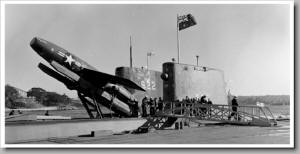 In Sydney Harbor with the British submarine HMS Anchorite outboard,
and an exercise [red bird] Regulus I missile on the launcher - May 1960. 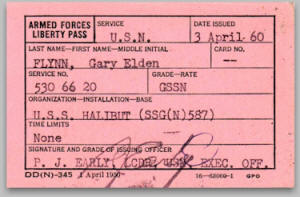 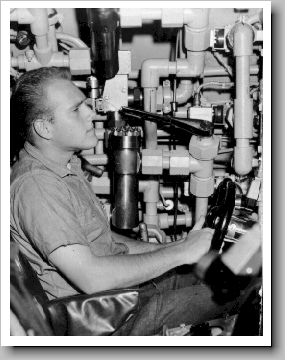 Intent on not loosing my "bubble." 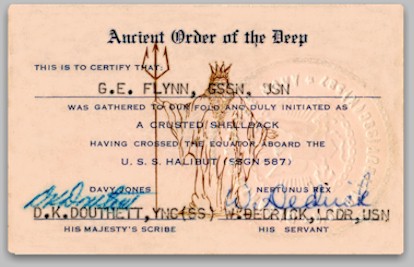 On 9 April, 1960, crossed the Equator at the 166th meridan west
en route to New Zealand & Australia 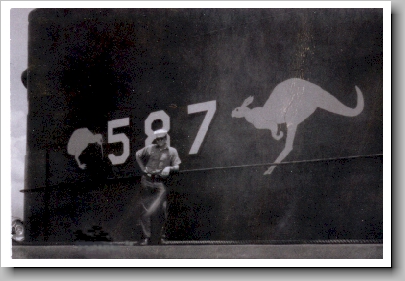 
All contents including images are copyright by AboutSubs.com
and can not be used without permission from AboutSubs.
Copyright © 1999