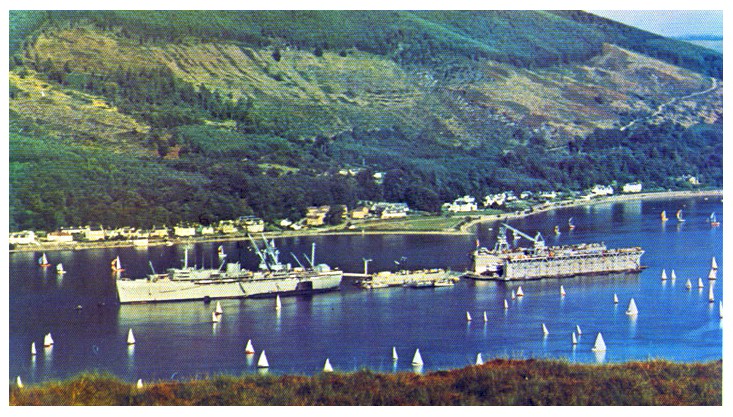 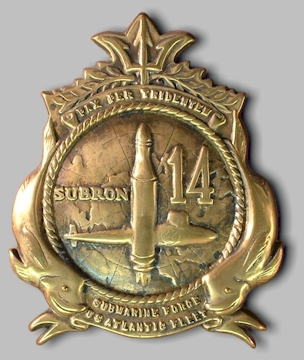 A Brief History of Site One:

In the autumn of 1959 the US Government presented the problem of providing forward servicing facilities for the first SSBN Squadron in the U.K. Studies were made of all the suitable places to base a refit facility and it was decided in July 1960 that Holy Loch should be the site. The Holy Loch was a Royal Navy Submarine base during World War II and the Firth of Clyde was one of the Royal Navy’s major submarine areas. Site One, as the base was known, was composed of three major commands, plus the Naval Support Activity.

Submarine Squadron 14, headquartered aboard the serving submarine tender, arrived in the Holy Loch on 3 March 1961, aboard the USS Proteus. The number of submarines being supported by the Squadron varied over the years, and the measure of that is that on 2 April 1987 the 2500th Ballistic Missile Deterrent Patrol was completed by USS Mariano G. Vallejo (SSBN 658).

The Dry Dock, USS Los Alamos (AFDB-7), was towed to Scotland in '61, and assembled in six months. Over a 30 year span,  Los Alamos completed over 2800 submarine docking operations.

With the reduction in European tension and the end of the Cold War it was announced on 6 February 1991 that the Holy Loch Base would close, and in March 1992 the last US Navy ship sailed out, thus ending  thirty one years of American presence in the Dunoon area.

I first arrived at Site One in January of 1963 as part of the Gold crew of the USS Thomas A. Edison (SSBN 610).  We were to relieve the Blue crew who had just successfully completed EDISON's 1st patrol.

I had the good fortune to return in Feb. '66 for assignments on the HUNLEY and the SIMON LAKE. My family accompanied me then, and on my subsequent assignment to the HOLLAND in July '79.  We've also returned for personal visits in June '72, Dec '92, July '03, and Sept. '05.

It's a very special place, and I'm grateful for having had the opportunity to live there and meet so many wonderful people.

Here's some Pub Paraphernalia that I picked up in Scotland and elsewhere. Cheers!