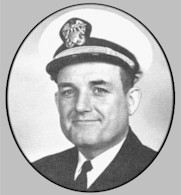 The late Rear Admiral Walter DEDRICK, USN, was born in Billings Montana, on September 28,1921, son of Mr. & Mrs. Warren A. DEDRICK. After one and a half years at the University of California at Berkeley, he entered the U. S. Naval Academy in 1941 and was commissioned Ensign in 1944. He attained the rank of RADM (LH) in 1971, and received his second star (UH) in 1973.

Admiral DEDRICK first served aboard the USS WILLIAM D. PORTER (DD-579), participating in the Leyte Gulf, Mindoro, Lingayen, Kerrama Rhetto, and Okinawa campaigns. Upon completion of Submarine School in 1945, Admiral DEDRICK reported aboard the USS CUSK (SS-348), the Navy's first Guided Missile Submarine, where he served for four years. After attending the Navy Electronics Course at Treasure Island, Admiral DEDRICK served a short tour aboard the USS CARP (SS-338) prior to attending the Naval Post Graduate School at Monterey, CA, and Massachusetts Institute of Technology where he received a Bachelors Degree in Electrical Engineering, and a Master of Science degree in Ordnance Fire Control Engineering. While at MIT, he was elected to the Sigma XI honor fraternity.

In May 1957, he reported to the Naval Reactors Branch of the Atomic Energy Commission where he served under Vice Admiral H. G. RICKOVER, USN, as a special assistant on submarine matters. After almost two years of instruction in the theoretical and practical aspects of nuclear power, he was ordered as the Prospective Commanding Officer of USS HALIBUT (SSG(N)587), the first nuclear powered, guided missile (Regulus) submarine.

After the HALIBUT was commissioned, Admiral DEDRICK served as her Commanding Officer until July 1961, when he was detached from the HALIBUT in order to attend the Polaris Command Course in preparation for duty as Commanding Officer(GOLD) of the nuclear powered Polaris submarine, USS THOMAS A. EDISON (SSBN-610). He reported to USS THOMAS A. EDISON for duty in October 1961.

For his duty in HALIBUT he was awarded the Navy Commendation Medal.

All contents including images are copyright by AboutSubs.com
and can not be used without permission from AboutSubs.
Copyright © 2006 ~ All Rights Reserved.