After commissioning, Simon Lake sailed from Bremerton on January 16, 1965 for Pearl Harbor on her shakedown cruise and returned to Bremerton on February 17 for a six-week yard availability period.  She stood out of Bremerton on April 16, 1965 and proceeded to Charleston, South Carolina, via the Panama Canal.  Simon Lake arrived at Charleston on May 1, 1965 and commenced duties as submarine tender for Squadron Four.

On 11 July 1966, she sailed for Holy Loch, Scotland, where she relieved USS Hunley (AS-31) as Site One tender for Submarine Squadron 14. 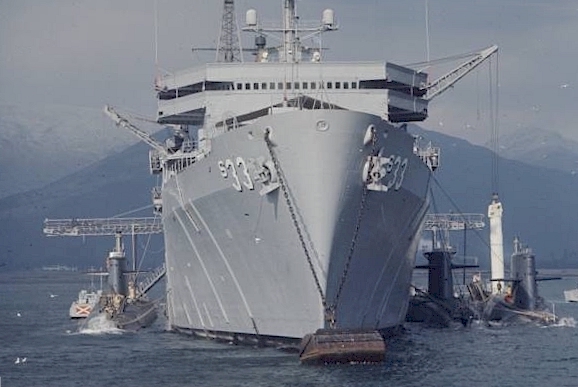 In June, she sailed for Bremerton for her first overhaul since commissioning. The tender was in the yard at PSNS, Bremerton, from 6 July 1970 to March 1971 and, while there, was also converted to Poseidon missile capability.

Simon Lake returned to Charleston in April 1971 and served there until she relieved USS Holland (AS-32) at Rota, Spain in December 1972 for a four year tour.

In January 1977, the ship got underway for Charleston to undergo a complex overhaul.  Following her overhaul she relieved USS Hunley (AS-31) as the resident tender in Charleston.

In July 1979, Simon Lake relocated to King’s Bay, Georgia where she became the first tender at the newly established refit site there.  Her outstanding repair work resulted in her receiving the 1982, 1984, and 1985 Battle Efficiency “E” awards.

In August 1985, she conducted a homeport change to Pascagoula, Mississippi to conduct an overhaul.  After the overhaul, she returned to Charleston in October 1986 where she accomplished routine upkeeps.

The Simon Lake returned to Holy Loch in  May of 1987 to again relieve the Hunley. She received the 1988 and 1991 Battle Efficiency “E” awards and was awarded the Meritorious Unit Commendation in 1992. She remained in Scotland until March of 1992, having the honor to be the last US sub tender to serve there. While homeported in Holy Loch, she steamed an average of 350 days a year. She also had the honor of being the last tender to serve at Site One. 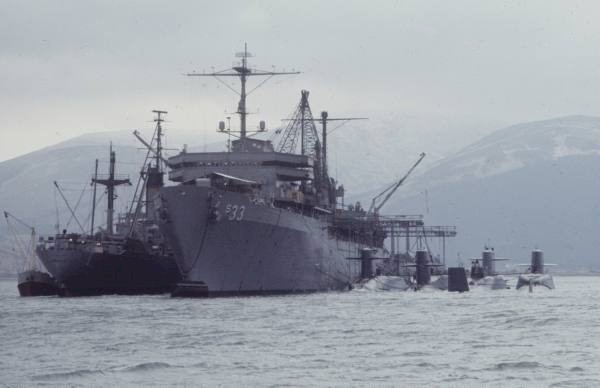 AK replenishment cargo ship alongside, plus four refits to port

In March 1992, Simon Lake returned to Norfolk to conduct an extensive overhaul.  After completion of the overhaul in March 1993, she departed for her new homeport of La Maddalena, Italy where she relieved the USS Orion (AS-18).  For superior service to the fleet, she received both the Battle Efficiency “E” and Meritorious Unit Commendation awards for the period July 7, 1993-August 31, 1994.

In March 1998, the ship transited the Suez Canal to the United Arab Emirates where she supported Operation Southern Watch in the Arabian Gulf.  Her outstanding performance during 47 availabilities led to her receiving the Navy Unit Commendation and Armed Forces Expeditionary Medal.  In June 1998, she returned to La Maddalena, Italy.

Simon Lake’s performance during her last two years of service was particularly noteworthy.  Not only did she receive the awards associated with the Arabian Gulf but she was nominated for the Secretary of Defense Maintenance Award, received the 1997 and 1998 Battle Efficiency “Es,” the 1998 Chief of Naval Operations Safety Award, the 1998 Golden Anchor award, and she became the first surface ship to receive both the Enlisted Surface Warfare and the Surface Warfare Officer pennants.

After being relieved by USS Emory S. Land (AS-39), Simon Lake departed La Maddalena on May 11, 1999 and crossed the Atlantic for Norfolk, Virginia to be decommissioned.

During her 36 years of dedicated service, Simon Lake provided all aspect of logistical and repair support for an average of 45 submarine and surface ship availabilities, consisting of over 5,000 vital repair jobs, annually.  Serving over 20 years as a forward-deployed tender, she served as an ambassador for the United States, showing the flag and entertaining foreign dignitaries during nearly 100 port visits in foreign countries. 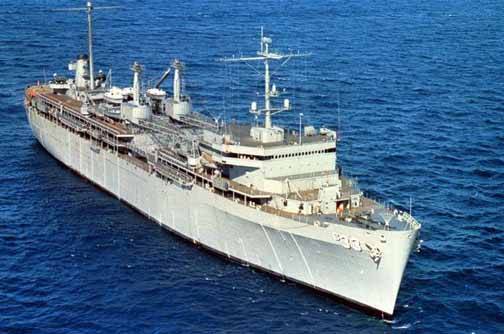 The Simon Lake was decommissioned on 31 July 1999 in Norfolk, VA.

For a more detailed history of the Simon Lake, see: Tender Tale